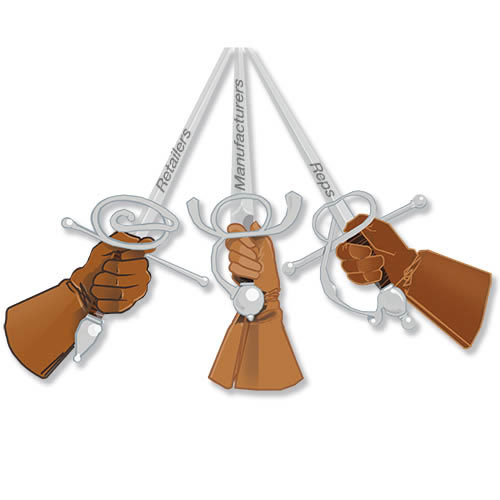 Market analysts are raising concerns that the industry is being oversaturated and this comes off the back of the announcement by Matalan that they are now to sell bathroom products online ‘at a value price point’ and that this is likely to be followed with the addition of kitchens over the next year.

It’s easy to panic and say this is another nail in the coffin of the independent retailer, but is it? Potentially, yes. But, like any market, there are places that sell good stuff and these places usually know all about their products and you get the feeling that they are, rather refreshingly, product and bathroom/kitchen nerds. Then there are the places that are enjoyable to shop in or buy from, but ultimately you don’t really know the people or care to.

And then there are places that are poor to shop in and sell a load of crap.

Each of them has their own market and we all know it is the customer that is ultimately going to decide. Provided they know they have the choice, of course.

Fighting back, suppliers and manufacturers are really, really behind the independent and more so than ever. They recognise that they must join in the fight for web traffic, so that they can pick up and divert some to their customers’ web pages or, ideally, showrooms.

Training
We used to have to chase manufacturers to see if they could add our store details on to their page, now they are phoning us to see if we have more images or stores we can add. We have been encouraged, pushed and even ‘harassed’ to let our staff visit factories – in Spain, and at their expense.

It’s never been a problem for us to support such a venture in Ripples, as we are addicted to training and staff development, but it’s been a real problem consistently finding supply partners that recognise training isn’t just about the features and benefits of product. But not anymore.

Laufen not only has its own dedicated showroom for training, but a dedicated trainer too. It is obviously convinced that there is a lot to say and share about the company and its products and, on that basis, we are happy to send our staff to soak it up. I am hearing very good feedback from both sides and they are not alone.

We used to have to chase manufacturers to see if they could add our store details on to their page, now they are phoning us to see if we have more images or stores we can add.

It’s happening in-store, too. Ten years ago, if a supplier’s representative came into the showroom without an appointment and dumped some brochures on the desk, they left about 30 minutes later. Not because they were given time to talk, but because Roger Kyme made them take notes and listen to his experience on how to be a “proper rep”. They either never came back or came back in a sharp suit, clean shoes ready to do a good presentation and always at the appointed time.

Today, they are business development managers, and they understand how they can develop our business and aren’t afraid to deal with the issues that prevent them – even if it’s us. Their iPads don’t just contain photos of new products, but spreadsheets of sales figures, sales versus display, top-selling products in their and our company. They have notes from previous meetings, news on some training and marketing activity and, despite probably having the same conversation an hour ago in front of another customer, they say it with the same enthusiasm as the first time.

Times that by the number of suppliers an independent would trade with and that has to bode well, doesn’t it? Ten years ago, the independent hi-fi industry went through a similar challenge. Their competitors were cheaper online (we all know the Richer Sounds story), Currys and Comet sold many of the same brands as they did and only the people who already understood the importance of good quality sound and vision came into their stores.

Now, the independent has started to focus on home cinema, installation and expertise. Customers are very educated and I do genuinely believe that experienced buyers know that if they want a music system for their child’s bedroom, they can get it in their local Currys, John Lewis or, if they know what they want, Amazon. Fine. But when they want to sit down and watch a blockbuster film with neighbour-upsetting levels of sound, you wouldn’t trust the work experience guy at Currys over the Bill Gates lookalike at the local independent hi-fi store. Would you?

What’s most interesting about the independent hi-fi story is how they realised as a group and industry that they had a great story, but no means of telling it. Manufacturers wouldn’t advertise their business for them and they couldn’t shout further than their local newspaper once a month. So instead, they clubbed together and put their money into single adverts in What Hi-Fi? Bestowing the virtues of their mutual five-star service. I honestly don’t know if it worked, but I noticed it, and so did my neighbours the first time I watched Top Gun.

I was sorry to hear that Manhattan Showers had ceased trading. But I wasn’t surprised. I didn’t know them and I am sure there are some good people affected, but it does feel like every month I receive an email from someone telling me that they have just joined yet another shower door company as national sales manager and can they come and see me. I always say no.

One of the best products on the market was/is Hüppe, and despite repeated attempts to make it work they pulled out of the UK market last year. Only they can tell you why, but in my humble opinion things went downhill the day Brausch & DHL stopped selling it and for me that highlights, as I have said many times before, that it’s the comprehensive nature of the package that matters most. Now, when people ask me who makes a good shower door – well designed and manufactured, well serviced and sold with some good old-fashioned love and pride – I point them towards Aqata.