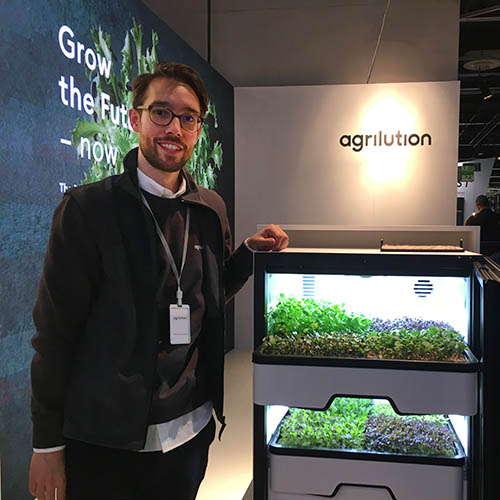 The German entrepreneur who invented and developed the Plantcube, a smart greenhouse that can be built in to a kitchen in the same way as a fridge or dishwasher, has said that he is looking to grow internationally next year.

The Plantcube, an in-door greenhouse concept using vertical farming technology to grow salads, micro-greens and herbs all year round, was officially launched at the 2019 LivingKitchen show in Cologne.

Max Loessl, co-founder and chief executive of Munich-based Agrilution, which created the Plantcube, told kbbreview that the product was one answer to the growing demand for healthy, nutrient-rich foods combined with increasing awareness of the environmental risks of the global food chain.

He said that the first deliveries of the Plantcube would be sent out in March to current estimates of around 30 independent German kitchen studios.

The Poggenpohl store in Munich is the first kitchen retailer in the world to stock the product, which uses the same LED technology, sensors, watering and climate control technology that large vertical farms have.

Loessl said: “Greens lose a significant portion of their nutrients hours after they are harvested. Salads and greens that you purchase in a store will only contain a fraction of their potential nutritional value.

“With greens freshly harvested out of the Plantcube, you can make sure you receive their full potential of valuable vitamins, amino acids, fibre and antioxidants.”

Its current retail price is €2,900, but Loessl told kbbreview that this will come down once the company starts to produce higher volumes.

Loessl, who studied international food and agri-business in the Netherlands after becoming interested in sustainable agriculture and vertical farming, said originally he took the concept to “all the major household appliance manufacturers”, but found them to be “super old and slow”.

The start-up is backed by venture capital.