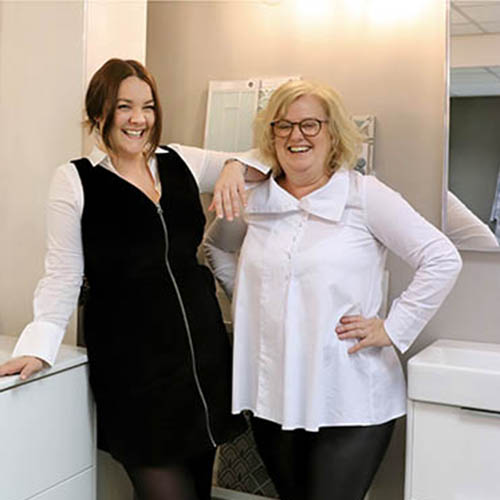 When Justine Bullock (left) and Lynda Rees (right) started The Tap End in Pontyclun in 2017, they never dreamt they would be finalists in the kbbreview Retail & Design Awards two years running, nor that they would be plunged into the chaos created by the coronavirus. Chris Frankland finds out what has made this all-female business a success.

You don’t have to talk to Justine Bullock for very long to discover she is passionate about bathrooms. And her enthusiasm for and know—ledge of the subject is backed up by a hands-on, on-site practicality.

The Tap End may only have started out in 2017, but the fact that they were a finalist in the kbbreview Retail & Design Awards, in 2018 and 2019, is a testament not only to that enthusiasm, but also their design talent.

So what did being a finalist two years running in the kbbreview Retail & Design Awards mean to The Tap End?

Bullock says: “We always knew we wanted to enter the kbbreview awards and it will be a great day for us when we win. We like your awards because – in the design categories – you have to present to the judges and that seems fairer.”

The Tap End has, however, won an award from its local Chamber of Commerce for start-up of the year.

With this issue turning the spotlight on influential women in the industry, it was a no-brainer to dedicate a retailer profile to The Tap End. The team there is all-female, although Bullock will tell you it was not planned that way. It was started by her and her friend Lynda Rees and has now grown into a team of five.

So how has Bullock found the industry reacts to an all-female team?

“We are an all-female team and sometimes old-school builders do not respect that. I’ve been in the showroom with my husband and had old-school agents’ reps come in, walk straight past me and start talking to him.

“We are not aggressively feminist, but we do want to change people’s perception of the industry. We want a female’s opinions to be recognised as equal to a male’s. And it is sometimes a struggle. We come up against old-school attitudes, but we are passionate about what we do and we can hold our own.”

“Sometimes we have to go out to site and show someone we know what we are doing, rather than just speaking on the phone to a fitter who has already made their mind up that because we are women, you can’t put the cistern where we say. There are five of us in the company and four of us have renovated our own homes and been really hands-on. So we have the practical experience, rather than just being computer-based designers. When we go to site, we are not tottering around in our high heels.”

It is often said that women are the main decision-makers when it comes to kitchen and bathroom projects. So has she found that being an all-female business is an advantage?

“Definitely,” she confirms. “We have a massive client base of single and divorced women or widows. Their husbands used to deal with things like the bathroom and now they don’t know where to go, or who to trust. They will come in for a chat and we build really nice relationships. We like being somewhere that has no massive agenda. We don’t want to be offering discounts. We like to deal with people who like what we offer. It’s about the experience, not just the end result.

“Yet many male clients come in and say they have been to other places and dealt with ‘sales’ people, and when they come to us, it is not a hard sell. People have the perception that we’re a bit ‘softer’ and won’t rip them off. They think ‘this women’s not going to be a cowboy builder’. They have a little more trust in us.”

But despite having twice been a finalist in the kbbreview Retail & Design Awards, The Tap End is still a young business. It was started in 2017 by Bullock and her friend Lynda Rees.

Bullock did a degree in fashion design at the same time as doing part-time work as a hotel receptionist. Within three months, she was pro—moted to supervisor at the hotel and put on the management track.

“By the time I finished my degree,” Bullock explains, “I was 23 and already had three or four years’ management training in customer service, which meant when I left university I went straight to work for an interior design company at management level rather than as a junior.

So how did the partnership with Lynda come about?

“Lynda was a client of that interior design company. She renovated her own home. That company then started looking for a part-time member of staff and she ended up going to work there. We worked together for seven years and we both loved the bathroom side of things most.”

So when she decided to start up her own business, it was an obvious choice to join forces with Rees.

She remembers: “I thought it would just be myself and Lynda. It would be really calm and maybe we’d have a little showroom, finish early some days, close for a couple of weeks in the summer – and it would be very chilled. But we were very wrong and from day one it has been crazy.”

Rees had no specific training as a bathroom designer, but Bullock confides that she is “amazing at customer service”. She handles operations, logistics and dealing with clients and suppliers.

“I am really passionate about the marketing, advertising and the design side,” says Bullock, “so we make a great combination.”

In terms of project numbers, Bullock says that despite the pandemic, they did 500 bathrooms last year – up from 350 the year before.

So the first lockdown didn’t really affect things too badly?

“No. If anything, people were stuck in their homes, and because we were very active on social media during that time, we were getting people who were asking whether, if they measured it all up, could we do a design for them, and they would come in when lockdown was over. And so, we actually got busier.

“Covid brought us clients that
were serious and ready. And turnaround has been quicker from enquiry to completion.”

Because of ongoing Covid restrictions, The Tap End has been doing ‘pre-consultations’ by phone. They have been getting clients to measure up for themselves, using their guidelines. Clients would normally then go into the showroom for a 3D presentation. But under the later, stricter lockdown in Wales, even that became impossible.

Bullock explains: “For clients who have been to the shop and have samples to look at, we are doing Zoom pre–sentations, but not for first-contact clients. If they have never been to the store, we are asking them if they would mind waiting. If they can’t, we can proceed using Zoom.

“There’s no pressure. We know it will take longer with nervous clients. We joke all the time that our job is 50% counselling and 50% bathrooms.”

So why did The Tap End set up in the village of Pontyclun, which is around 10 miles west of Cardiff city centre, rather than in the city itself?

Bullock responds: “We had long debates about whether to open in Cardiff or out of town. We decided to go outside of the city centre because there were a number of larger bathroom showrooms closing in Cardiff. We said, ‘why go to the graveyard of bathroom showrooms?’

“We didn’t have the means, resources or staff to do that and if we had gone down that [city centre] route, it would have been for all the wrong reasons. We decided that was not us.”

Also, there was no local bathroom shop in Pontyclun.

They got the keys to the shop in November but did not open until Easter 2018. Although the shutters were down during the fit-out, they put signs up outside. Bullock says that even before they were open, they had lots of people contact them, which she suggests was all down to their social media presence and website.

Bullock explains: “It was remarkable. We weren’t expecting that response from just putting a sign up, but I don’t think we would have had that if we hadn’t had a social media presence. For us, social media remains crucial now and will always be.

“We have had lots of business from Houzz. Instagram is probably our favourite social media platform because it is so image-led. We are not on Pinterest, which we should probably look to go on in the future.”

The Tap End deals with mainly Laufen, Roca, Hansgrohe and Axor. The showroom has three full room sets and then smaller single bays with basins and toilets. Bullock says it is set up to suit the kind of client who knows what they want and that The Tap End can create something special.

She adds: “We like the mid-range products. We like to be constantly busy with loads and loads of projects that have quite a quick turnaround. The middle ground is where we thrive.”

There are no brands mentioned on their website. Why is that?

Bullock says: “We don’t highlights brands on the website because we don’t want people to think we’ve got loads of displays. It’s about people understanding that we’re about design and not being a brand collector.”

And for installations, they do not employ their own installers at this stage, but have 12 teams of trusted fitters they recommend to clients.

Looking ahead, what does the future hold for The Tap End?

Bullock concludes: “We have dis-cussed a second showroom but it won’t be something we rush into. We love the showroom that we’ve got and the staff that we’ve got.

“For us, I think it will be organic rather than forced.”