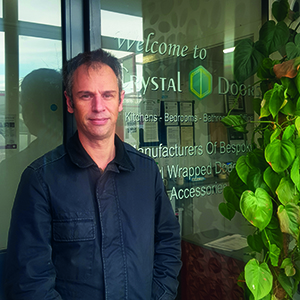 Green light for indies and red faces for sheds

Our climate change champion Richard Hagan, managing director of Crystal Doors, says that small companies can lead the way in the quest to save the planet

Sometimes we can fall into a trap of believing that large companies hold all the power. But when it comes to sustainability, I have found the opposite to be true.

Large UK companies are required by law to disclose their greenhouse gas emissions, and many are under more pressure than ever before to go further, as pension companies and investors demand more detail on their environmental impacts.

Powerful companies are struggling to come to terms with the fact that the ‘golden era’ of enjoying obscene profits, while hiding their damage to the environment, is coming to an end.

However, for small and medium-sized businesses, the situation is very different. We may not be required by law to disclose our environmental impacts, but to do so requires only a fraction of the time and energy it takes for larger companies.

Pledging to become carbon neutral before 2050 – something we all must achieve – is a comparatively simple undertaking, and publicly committing yourself to it already makes you greener than the average corporate. You can then spend a year gathering data for your first carbon footprint, which can be calculated in just a day by an efficient accountant.

Crystal Doors undertook our first carbon footprint in 2015, from which I set out a strategy, and with little money innovated a roadmap to be carbon-neutral. For me, environmental actions were not a tick-box exercise, which is how most large companies see it. I replaced cost with value, where every decision took into account the balance of environmental considerations and saving money. We installed LED lights with a three-year payback and solar panels with a six-year payback without impacting cash flow. We switched to 100% electric cars and changed motors to more efficient inverter drives.

This year, Crystal Doors is asking all stakeholders to make the carbon-neutral pledge. This will reduce our indirect carbon footprint, but more importantly will prove that our entire value chain is taking action. Larger companies will not lead the way because their accountants only count numbers. But smaller, independent KBB suppliers can adapt incredibly quickly, and collectively our environmental impact exceeds that of the sheds where profit for shareholders drives their business.

We have just a few years left to avoid Earth’s tipping point to climate disaster. Act now – those left with red faces will be large companies whose accumulated wealth has been at the cost of our planet.